It’s been nearly a year since I made this set of Robot Appliqué Pillowcases (see Part 1 and Part 2), and I had neglected to take photos of the finished product until just last weekend.  Continuing where I left off on the pseudo-tutorial of Part 2, the last thing I had to do was sew on the black-button eyes and then sew the pillowcases shut.  I’m not sure why the purple is coming out blue in a lot of these photos, but I think it has to do with the lighting.

I picked up a snazzy “Handmade By:” stamp from JoAnn’s.  I didn’t have an embossing stamp pad (need to pick up one of those), but I had a purple embossing marker.  I made a couple of tags by coloring the stamp with the marker, stamping a piece of a manila folder, and then throwing some clear embossing powder on it.

I’ve been sick for almost a week and I almost can’t remember what it was like to not sound like a man or be able to hold a conversation without coughing.  Being sick puts quite the damper on one’s social life, as my usual routine is to head to the gym after work a few days a week.  However, I think working out or playing basketball under such conditions would be the most inconsiderate thing I could possibly do.  Also, who wants to guard that gross wheezy girl, or gasp for the same stale gym air as sneezy over there?  No one. The first few days of January inevitably create a surplus of people at the gym trying to keep up their New Year’s resolutions in vain.  At least I have an excuse to do something else productive with my free time… assuming that writing here is productive in some way.

ANYWAY, I saw the how-to for this on Paper Source’s blog, and thought I’d give it a try.  I made this for Kevin’s birthday back in August to go with his relatively new apartment, keeping with the theme of the Robot Appliqué Pillowcases (Part 1 and Part 2 ).  I still need to take a decent photo of the completed set to complete the pseudo-tutorial.  Kevin (who makes up about half of my readers), don’t worry I will get around to finishing that last post up.

I found some great paper at a hole-in-the-wall scrapbook supply store, and used leftover cardstock from some mini-scrapbook kits I made a year ago to give the organizer some sturdiness to it.

This project wasn’t too complicated, so I’ll just get sraight to the photos.  The green divider is removable, so you’re not confined to any given space.

The instructions for the how-to are here.

Appliqué – a decorative design made of one material sewn over another.  It is pronounced “APP-lee-KAY“, and not “uh-PLEEK” for those of you who are dumb enough to think the latter (e.g., yours truly).  I made the mistake of saying it as such at the office a couple of years ago, and I have yet to live that one down.

Continuing where I left off on the Robot Applique Pillowcases, I cut out the robots and ironed on the fusible interfacing to the backside of the green cut-out.

I had done everything to make the pillowcases using the purple cloth, except for sewing them shut to make it easier to apply the robots.  I pinned the ‘bots into place and then used small straight stitches to secure them, and then went over them again using zigzag stitches for aesthetics. 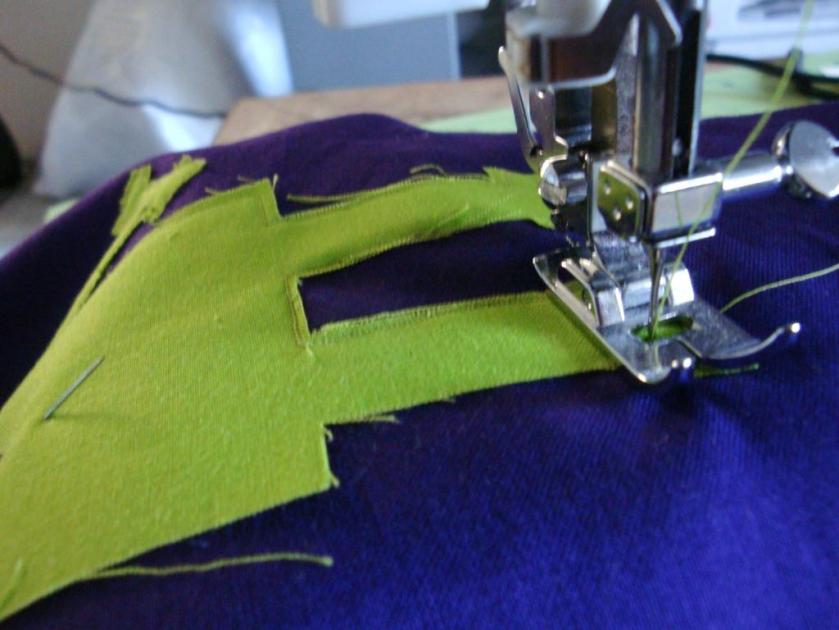 I cut out a “T”-shaped piece of green cloth to make the antenna and stitched it on top of the robot’s head as an afterthought.  A robot just isn’t a robot without an antenna, right?  I bought small heart patches and sewed them on by hand.  Unfortunately, the patches were backed with a thick wax backing, and I managed to shove a needle into my thumb during the process.  Thankfully, the hearts were already red, so Kevin couldn’t tell if I bled on his gift.  KIDDING.

Disclaimer:  The “everywhere” in “AT-AT Everywhere” applies to several things – one of them being my attention span.  That being said, this project is getting divvied up into multiple entries and probably interspersed between other posts .  I will (try to) give a pseudo how-to, since I didn’t pull this project from any of my nifty sewing books.  As mentioned previously, my grandma taught me how to make pillowcases in high school, and I learned the proper steps and supplies needed for appliqueing by harassing the same poor lady at Jo-Ann’s three days in a row.

What gift do you get for the “Resourceful Has-It-All”?  We’re talking about someone who already has everything (that a normal person could afford to buy), and can find anything you buy for half the price somewhere online.  And if you thought you were clever already finding it for half off, they’d probably be to find it for free somehow.  You now know a little bit about Kevin.  So as you can imagine, I had quite the dilemma when brainstorming birthday gifts for him this past summer.

I conceded that handmade was the way to go.  Why robots?  I have a not-so-secret obsession with robots that Kevin is aware of, and to an extent perhaps even shares.  The shape of the robot applique was inspired by the below necklace I saw (and have been pining over) on a random Google image search a few months prior.

I made the applique stencils by drawing them on a manila folder and cutting out the pair.  One thing to remember when creating appliques is to keep the shapes relatively simple, because complicated shapes are really difficult to stitch on.  After starting the appliqueing process, I quickly began to regret not choosing a simpler silhouette.  Like a square.

Next, I traced the outline of the stencil onto the green applique fabric.  I was worried that the green wouldn’t look as vibrant against the dark purple pillowcase, so I purchased some fusible midweight interfacing and made another set of robots a bit smaller than the ones made from the green cloth.  This semi-opaque white backing for the applique kept the green bright, and also prevented holes from forming when I stitched it to the pillowcase.

Click on the thumbnails below to view them larger.  More to come next time!