For Jamie’s birthday nearly two years ago (yes – still drowning in a sea of backlogged posts), I made this fun little pintuck piece since she’d told me she was in the market for an apron.  I found the tutorial on Wholly Kao, and wholeheartedly accepted the challenge.  And boy, was it a challenge!

I don’t think I’ve made something this difficult since those baby booties a few years ago.

Here’s the tutorial as adapted from Wholly Kao, but having the diagrams she drew in her tutorial will really help you:

*If you want, you can just buy pre-made ruffles by the yard at the fabric store instead. If you do that, skip to “Assembling the Pieces Together”.

ASSEMBLING THE PIECES TOGETHER:

And here is the birthday girl!

While the apron turned out pretty cute (if I do say so myself) in the front, it was just a hot mess behind it.  Lots of thread everywhere from places I went over and fixed, and I had a lot of thread-breakage issues for some reason with this project. I thought the tutorial was great with getting me to the end product, but there wasn’t a lot of thought put into covering up the unsightly back of the apron fabric.

Some photos from a utility apron I made for Jamie to give as a Christmas gift to a fellow elementary school teacher… I like to call it my first “paid gig”.  After countless arguments about how much to charge for my labor (I insisted on $1 an hour and Jamie insisted that I don’t work in a sweatshop and we aren’t in China), I humbly accepted payment in the form of a box of fancy caramels and a nifty purse hook.  Thanks, Jamie!!

I think this was my favorite part of the apron – the holster for the scissors!  Stick ’em up!

And here is the completed project!  There are lots of pockets for all the things teachers carry around in the classroom… like pens and rulers and markers and… candy…?

My mentor (often referred to as JM) and one of my best friends is a big workout/health fiend.  Earlier tonight, he e-mailed me a link to his YouTube featuring some of the advanced calisthenics exercises he’s doing.  Can anyone tell me what’s wrong with the below screenshot of my web browser? 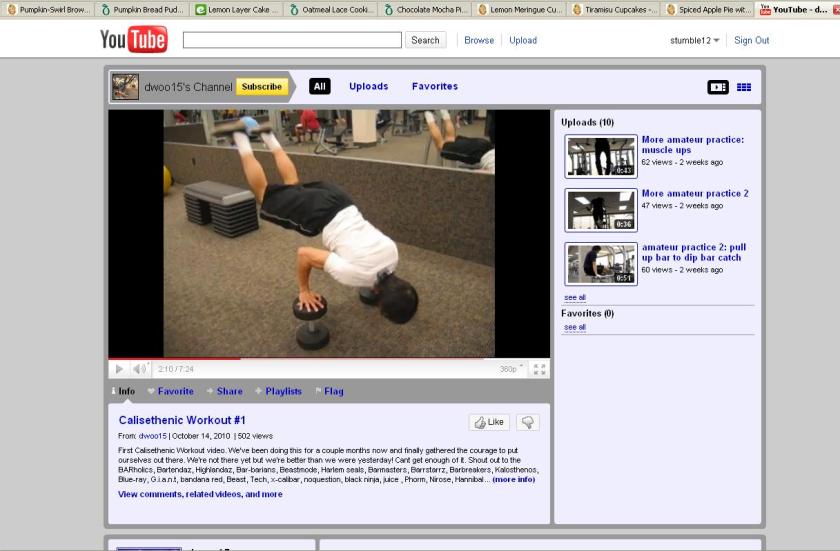 I need to go to the gym.

New projects in the near future include some sort of baked good for a dinner party this Saturday and a utility/teacher’s apron (thanks Jamie!).  I have a few other ideas that will hopefully come to fruition before the holidays, so stay tuned! In the mean time, enjoy the video!

As a follow-up to my last post, here is the final piece to the kitchen set – the Café Apron.   But of course, some back story…

We have something called the “IMAX-10” at work.  Similar to the Freshman-15, one almost always gains 10 pounds their first year at IMAX largely due to our most highly trafficked pit stop – the snack table.  Much to my waistline’s dismay, I sit within an arm’s reach of aforesaid snack table, but this also means I get first dibs on whatever goods are put out, including my boss’s homemade baked delectables.  Bernie is a baker extraordinaire, and I swear she puts a little bit of heaven (or quite possibly crack) in every one of her confections.  My first attempt at the kitchen set (potholders, oven mitt, and café apron) was destined to belong to her last Christmas!

I pulled the idea for this project from Lotta Jansdotter Simple Sewing: Patterns and How-To for 24 Fresh and Easy Projects.  The pattern for the oven mitt was used for the pocket of the apron.

To give you some context of how popular her desserts are, she’ll put an entire chocolate bundt cake on the snack table bright and early at 9am, and you’ll be lucky if you even see crumbs on the table by 10:30am.  Keep in mind, we only have less than 25 people on our floor.  The only way one would know she brought in her infamous eight-layer bars is by searching for flakes of coconut and bits of chocolate and toffee in the professional baker’s boxes she packed them in, while he sole remnants of the mini blueberry pies she brings in reside in the corner of a coworker’s mouth.  Yes, we eat her desserts for breakfast, lunch, and dinner when she brings them in.  I will admit, I’ve been guilty of snarfing two servings of her treats – one for now, and one for later.

I hope the apron et al comes in handy for the indulgences that have been made and those that I have yet to enjoy (and those my waist detests me for eating!).