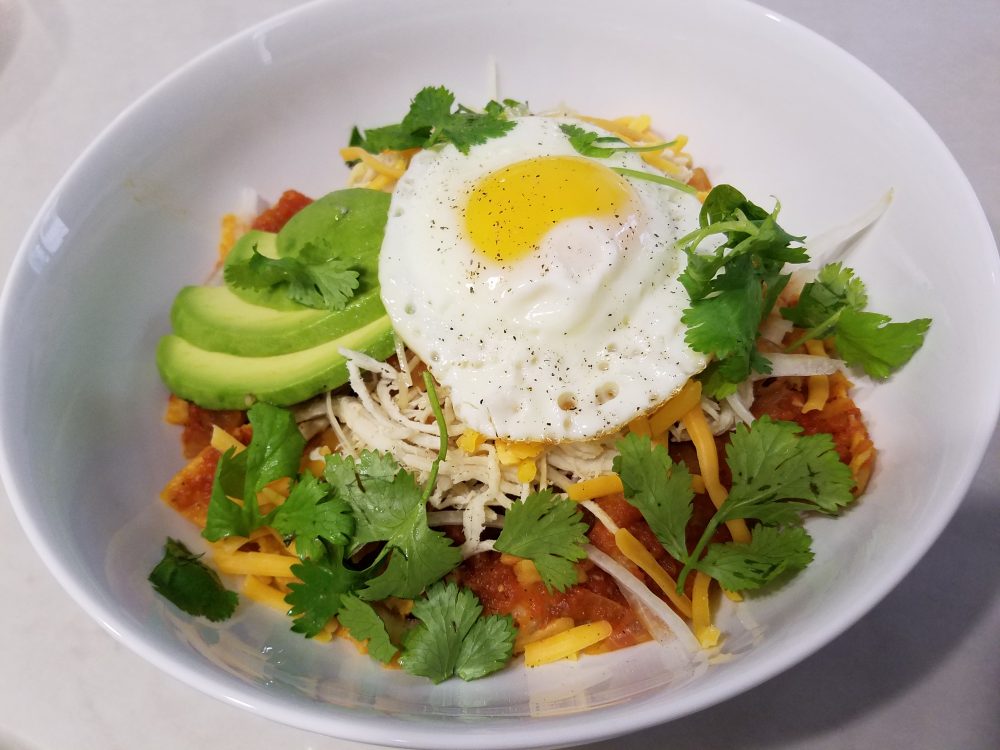 Continuing the festivities during Kevin’s birthday celebration weekend, I wanted to make some sort of Mexican breakfast (his favorite).  If we are ever out to brunch and chilaquiles are on a menu, it’s a given that he will order it.  I wanted to make a different kind of chilaquiles dish to mix it up from what you’d find in a restaurant and came across this Rick Bayless recipe on Food and Wine Magazine.  I was drawn to the idea of a smoky chipotle chilaquiles dish, and I still had some chipotle chiles in the freezer from a previous recipe!

NOTE: The recipe makes 4 servings and can be prepared through Step 2 and refrigerated overnight. Reheat the chipotle-tomato sauce before proceeding.

*I decided to make my own baked tortilla chips instead of using store-bought chips or deep-frying.  I highly recommend baking tortillas to make chips vs anything else, since you can slightly over-bake them to dry them out a bit more.  That way, they won’t get too soggy in the chilaquiles sauce!  I used a Food Network recipe and baked for 2 minutes longer than recommended.

**I highly recommend keeping a batch of shredded chicken on hand for any occasion.  You can easily thaw and use it in salads, sandwiches, enchiladas (recipe forthcoming!), and of course, chipotle chilaquiles.  The Kitchn’s instructions for making shredded chicken in a slow cooker is my favorite – it’s easy and you don’t lose any of the nutrients by boiling the chicken, nor moisture by using the oven.  I strain the fat out of the stock after and use it for other things too!

For Kevin’s birthday this year, I made the last cake I’ll probably have time to bake for a long time.  His side of the family came over for a celebration, and I wanted to make a cake with a lighter feel.  I went with my favorite go-to chocolate cake recipe for the cake and added fresh strawberries and bananas in between the cake layers.

And instead of frosting, I went with a chocolate whipped cream after coming across the perfect recipe on The First Year.  I also love the look of a naked cake, and tried to do something similar.  However, I made the whipped cream a bit stiff so that it would hold up longer out of the fridge and it wasn’t as easy to spread.

When you want a whipped cream that will last longer, you should also freeze the mixing bowl and whisk you’re going to use in advance.  With frosting, whipped cream, or any other recipes where texture is important and you’re adding lumpy dry goods to it, I also recommend sifting the ingredients to prevent lumps!  Here’s the delicious chocolate whipped cream recipe as adapted from The First Year: 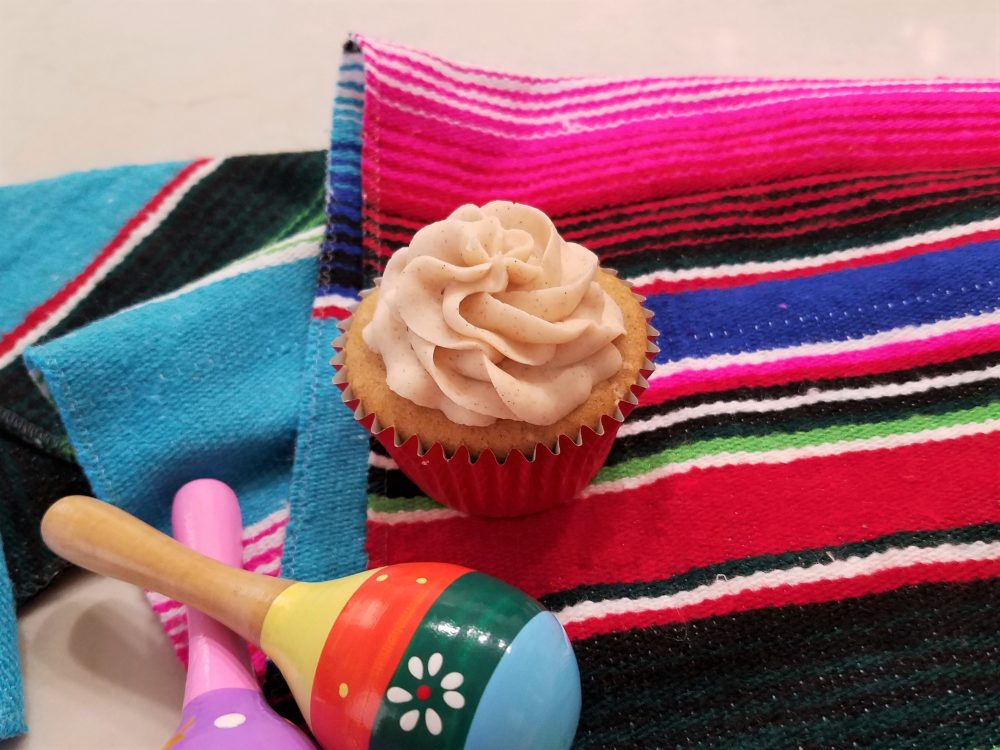 I threw my mom a surprise party to celebrate her big 6-0 last month with my extended family – about 20-25 of us in all.  Given her East Los Angeles roots and inherent love for Mexican food, I decided to give it a fiesta theme.  I ordered a taco bar style set-up from a fantastic family-owned Mexican restaurant near us and of course a portion of their fantastic mole (mom’s favorite).  I made Tomatillo Salsa, pico de gallo, guacamole, and three desserts for the party – Key Lime Bars with Pistachio Graham Cracker Crust (sans compote), Aaron Sanchez’s Mexican Chocolate Brownies, and these Churro Cupcakes.

It’s been crazy busy at work the last few months, so I parceled out my time spent on crafting/planning over the course of about six weeks. For decorations, I found a few fun colorful pieces on Amazon that livened up our otherwise intentionally monochromatic home – paper buntings, serapes, festive patterned tablecloths, and pom poms.

Kevin and I also ended up hosting Christmas dinner which was two weeks before the party, so we had to hide everything away before she came over.  All of the streamers, party utensils, napkins, and plates were from Party City in every sort of bright color. I also bought a couple of cute craft kits from Paper Source – a mini pineapple pinata and a DIY set of six paper cacti. I used a white gel pen to add some “texture” to each cactus as well!

Jamie let me borrow her set of acrylic paints so I could add some color to the terra cotta pots I bought for the party favors.  They held the miniature cactus candles.  I also found some colorful candies to fluff up the favor bags.

Since Kevin and I had to go to a family wedding the morning of the party and with how long it takes to make cupcakes, I made these late the night before.  I was worried the crunchy topping that the original recipe suggested would get soggy overnight, so I skipped that component completely. Here is the recipe as adapted from Lady Behind the Curtain, without the crunchy topping!

Not having the time to actually paint anything, I searched online for some watercolor pieces to incorporate into the DIY dessert toppers, the invitation, favors, and more.

I had to keep the surprise from my brother as well until he came over, since he cannot keep secrets.  My mom thought she was meeting at my place and carpooling with me to a restaurant nearby.  I wanted to make sure I recorded her entrance, so I had my brother let her in the community gate when she arrived.  Right before she walked in, he asked, “Are you ready?”  Good thing she wasn’t already suspecting anything!

My mom was really surprised and had a wonderful time, and it’s always great to spend time with my rambunctious family!

For Jamie’s birthday nearly two years ago (yes – still drowning in a sea of backlogged posts), I made this fun little pintuck piece since she’d told me she was in the market for an apron.  I found the tutorial on Wholly Kao, and wholeheartedly accepted the challenge.  And boy, was it a challenge!

I don’t think I’ve made something this difficult since those baby booties a few years ago.

Here’s the tutorial as adapted from Wholly Kao, but having the diagrams she drew in her tutorial will really help you:

*If you want, you can just buy pre-made ruffles by the yard at the fabric store instead. If you do that, skip to “Assembling the Pieces Together”.

ASSEMBLING THE PIECES TOGETHER:

And here is the birthday girl!

While the apron turned out pretty cute (if I do say so myself) in the front, it was just a hot mess behind it.  Lots of thread everywhere from places I went over and fixed, and I had a lot of thread-breakage issues for some reason with this project. I thought the tutorial was great with getting me to the end product, but there wasn’t a lot of thought put into covering up the unsightly back of the apron fabric.

In celebration of Shirley’s birthday last month, we decided to do a potluck/wine tasting. Shirley, Spencer, Leslie, Tri, Kevin, and I contributed wine from our favorite vineyards, and everyone brought something for dinner.

I volunteered to do dessert, and an ice cream cake seemed like a great idea to cool us off in the midst of the crazy heat wave.

I knew Shirley liked tiramisu, so why not combine the two and do a tiramisu flavored ice cream cake?  I ended up combining various parts of three different recipes from Martha Stewart and The Delicious Life.

Here is the combined recipe, which was a big hit with our group:

I started with two pints of ice cream, but my springform pan was not big enough to hold everything so I really think 1 pint each is enough.  I also topped my cake with 2 tablespoons of cocoa powder just to create an even layer with no marscarpone showing through (as below), and all six of us took turns choking on the cocoa powder.  Unless you want the same affect, perhaps scale back to about 1 tablespoon overtop.

You can also sub the chocolate ice cream for espresso ice cream if you want more of a very strong coffee flavor.  For the ground espresso, I went to Intelligentsia for their Black Cat espresso which is the best espresso in LA in my opinion.  It turned out that the barista helping me was an avid baker as well, and we ended up having a lengthy conversation about the wonders of adding coffee in chocolate desserts.  Long story short, she gave me about $8 worth of ground espresso for free!